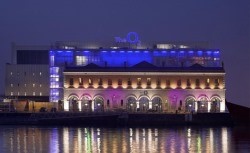 The 3 Arena, located on North Wall Quay in Dublin was formally known as the Point Theatre. The point theatre was a much smaller music venue in Dublin and operated between 1988-2007.  In 2008, The 3 Arena was re-opened after undergoing a large scale refurbishment project and now has a capacity for 14,000 people and can facilitate major international performers like Beyonce and Ed Sheeran. In 2011 The 3 Arena had a record number of ticket sales which has made it one of the world’s most popular musical venues and since has strived as a popular musical venue in Ireland for national and international performers.
It should be noted that parking is limited at The 3 Arena and we would advise that you avail of public transport. Dublin Bus offer daily services to The 3 Arena and the number 151 will drop you directly outside the venue. The Red Luas line also runs directly alongside The 3 Arena and is a favourable option for musical fans attending the concerts.
For a full  list of upcoming events in The 3 Arena Dublin visit www.3arena.ie
Celtic Lodge is located in Dublin City Centre is less than a 10 minute drive to the 3 Arena. We offer excellent pre-theatre packages with Le Bon Crubeen, which is the ideal choice if you are attending a show in the 3 Arena Dublin.