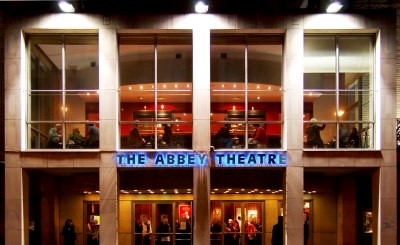 The Abbey Theatre was founded in 1904 by W.B Yeats and Lady Augusta Gregory and since then it has thrived as a popular theatre in Dublin. The company originally traded under the name The National Theatre Society Limited but in 2006 this company was dissolved and the company’s assets and liabilities were transferred to the Abbey Theatre Amharclann Na Mainistreach who now runs the Abbey Theatre.
In 1925 the Abbey theatre was the first theatre in Ireland to be given an annual subsidy by the new Free State and since then the state has continued to give an annual grant from the Arts Council of Ireland to The Abbey Theatre. Each year this Dublin City Centre theatre produces diverse programmes aimed towards theatre lovers.
For a full list of upcoming shows in the Abbey Theatre visit www.abbeytheatre.ie
Celtic Lodge Guesthouse is located just a 5 minute walk from the Abbey Theatre. We have excellent pre-theatre packages available for guests attending a show in this Dublin theatre.